Suit Up for Antarctic Adventures

See Antarctic Dinosaurs before it closes on January 5!

Antarctic Dinosaurs takes visitors on a journey through centuries of polar explorations, from the earliest explorers competing to be the first to reach the South Pole to NHMs present-day paleontologists excavate fossils of dinosaurs beneath the snow-dusted rock.

The vast continent of Antarctica, almost twice the size of the Lower 48 has always been a research haven for scientists from around the world.

For the earliest explorers setting out in the late 1800s, Antarctica held the promise of fame and prestige and also financial security to the team's families. The prevailing sentiment was that it was vital they discover some-thing groundbreaking on the brutally cold continent—no matter what the cost.

As visitors will see in the exhibition, each of these earlier explorations was an enthralling tale of misadventures, fateful endings, and triumphs. The first crews reached Antarctica by ship and then relied on smaller boats, sleds, pack animals, dogs, skiis, and snowshoes to reach the interior. Captain Robert Falcon Scott, British Royal Navy officer, who led the Discovery Expedition (1901–04) had to turn back 480 miles from the pole. There was the Swedish Antarctic Expedition in 1901–04 that succeeded in mapping the coast, but the ship was crushed by pack ice and the crew had to be rescued. It was on that journey, however, that American artist Frank W. Stokes gathered the first fossils ever recorded from Antarctica. He discovered fossils of ammonites, crustaceans, and bivalves dated to the Late Cretaceous, 78–66million years ago (visitors can see this rare display in cases near the entrance to the exhibition).

The winners of the South Pole race were Roald Amundsen and his five-man Norwegian Antarctic Expedition, who between 1910–1912 were the first to successfully reach the South Pole. The crew of the Terra Nova Expedition(1910–1913), again led by Scott, weren't so lucky. They reached the pole five weeks after Amundsen’s team, but during the return journey, they were hit by a blizzard and stranded. All five polar party members died—just 11miles from the nearest supply depot. They remain buried in the ice sheet.

Visitors to Antarctic Dinosaurs will see some of the fossils that were later discovered with the crew: about 40 pounds of material, including petrified wood, carbonized sandstone, and plant remains from hundreds of millions of years ago.

Another British explorer, Ernest Shackleton, attempted to make the first land crossing of Antarctica, but his ship, Endurance, was crushed by pack ice. The stranded crew was rescued in 1917. 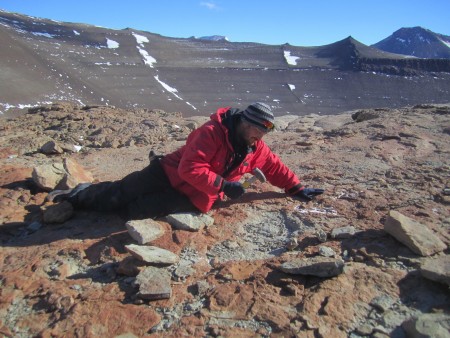 Fast forward to now, and there are 32 nations with permanent or seasonal stations in Antarctica. The largest is the United States’ McMurdo Station, which can house more than 1,200people. Instead of ships and sleds, today’s scientists usually fly from basecamp to their research sites in planes like the Lockheed LC-130 (visitors take a seat in the fuselage installed in the gallery).

Visitors who want to cruise into modern-day bone-chilling adventures and walk in the snowshoes of today's scientists will have two expert guides: Dr. Nathan Smith, Associate Curator of NHM’s Dinosaur Institute, and Dr. Peter Makovicky, Curator of Dinosaurs at Chicago’s Field Museum. Antarctic Dinosaurs tells their story of how, on several expeditions over more than 15 years, they have been excavating dinosaur fossils on a remote mountainside quarry. They have unearthed the bones of Cryolophosaurus, the best known and most iconic dinosaur of Antarctica (and a star of the exhibition), who would have been one of the largest predator that existed during the Early Jurassic. Visitors will even have the chance to see new species of herbivorous dinosaur discovered from the most recent expedition.

Smith says it’s cool to be on a continuum of generations of Antarctic explorers.

“We have it really good now, in terms of how safe it is to do work down there. How good our equipment and clothing and communication gear is, how easy it is to stay in touch with people and help facilitate getting our basic research done,” he says. “So, you definitely feel a little bit guilty and appreciative at the same time—that you've got the benefit of all those folks who have come before you.”

And More From Our Polar Explorer!